You are here: Home1 / News2 / Labvision reports about XiltriX and Cryo Products joint project in Bra... 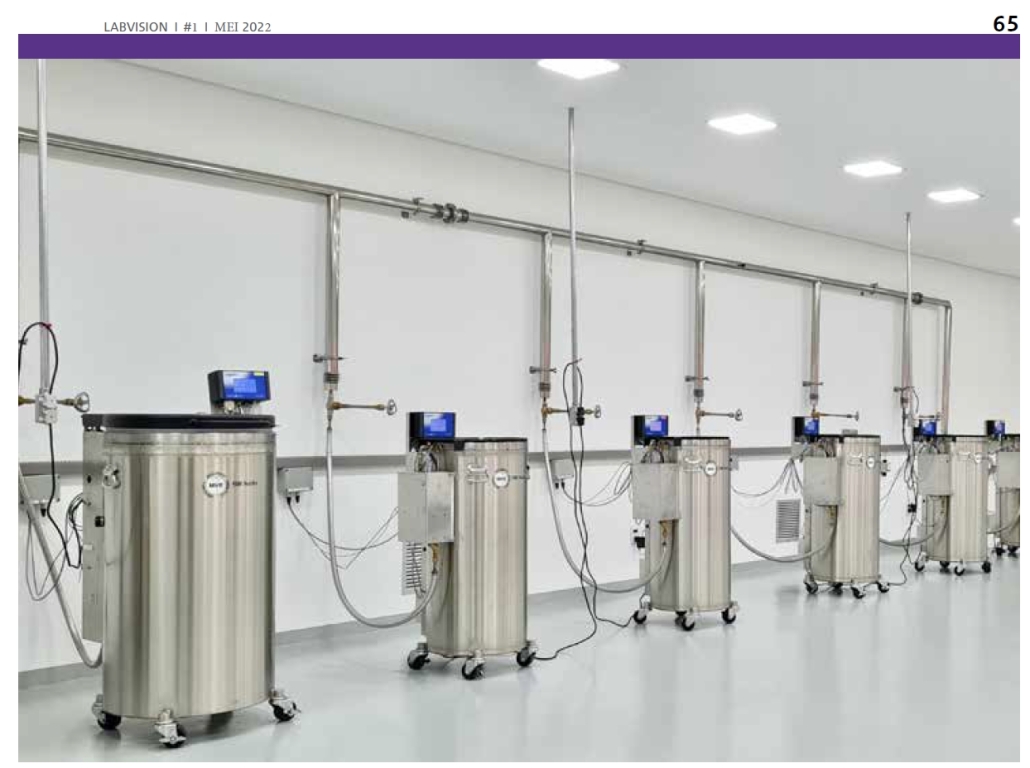 In the most recent Labvision a nice piece was printed about the joint project of XiltriX International and Cryo Products. The installation has been running very well for a prolonged period of time and has recently been expanded with scales, weighing the liquid Nitrogen, with XiltriX real-time monitoring also successfully integrated.

Please download the article by clicking on THE DOWNLOAD LINK, or the downloadable item next to this post. Also, because the article is written in Dutch a translation of the piece can be found below.

Labvision; Control and monitoring of cryogenic storage in Brazil installed from the Netherlands

In the midst of the Covid period, CryoForLife has a facility in São Paulo built for the commercial cryogenic storage of IVF samples. The intention of COO Dr. Christine Allen was to create the highest possible business security. Essential in this are automatic filling systems and a well-integrated alarm and monitoring system. Cryo Solutions and XiltriX International have it from The Netherlands not only delivered, but also for a reliable working installation provided. And that without taking a single step set in Brazil.

The global IVF industry is booming. This means that more and more samples have to be stored cryogenically. Laboratories, especially those outside Western Europe (where the Netherlands and Belgium also stand head and shoulders above the rest), struggle with the challenges of storing samples in a safe, well-monitored way. The situation in many of these labs is characterized by the use of nitrogen vessels that are only approved for veterinary use, a practice of manual filling, where the level of liquid nitrogen is not controlled, and the lack of adequate monitoring and alarm systems. Often only the temperature is measured, which is a preventative measure that is throw out the baby with the bathwater. After all, when the temperature rises it is often too late to save the sensitive monsters.

Dr. Allen, who has been managing and advising IVF labs for many years in the United States, knows better than anyone else what the impact can be of poorly equipped cryogenic facilities. “Large storage vessels are more often used nowadays with automatic filling controllers. But those are not reliable and not well matched to an alarm and monitoring system. Alone in the US, several incidents have been reported where thousands of embryos were lost. And that’s just the tip of the iceberg. Because maybe a hundred similar cases are kept out of the public eye. The following applies to all these incidents: great suffering for the patients and often sky-high damage claims”, according to the Brazilian embryologist, who has been involved in several lawsuits acted as an expert witness and know first-hand what can go wrong the moment a tank doesn’t get well monitored and/or not properly filled.

Not the American way

When Dr. Allen was asked to be in her home country a commercial cryogenic has a storage facility to set up they indicated that this would her conditions should to happen. So not piece of string the (South) American way, but on the basis of an integral plan, with well-integrated couplings between barrel, filling machine and monitoring system. As for the latter, she was already familiar with the Rosmalen-based XiltriX International, that also a branch in the United States States has. Han Weerdesteyn, CCO of XiltriX International, then took over the project. “I have told her straight away that just a monitoring solution is not enough. You also have to make sure you have a proper link have with your equipment, with especially the filling machines. At that moment she had already bought that equipment in the United States and was already on its way to Brazil. She initially suggested on a small scale to get started with it to go. But she soon found out that the purchased equipment in their situation did not work. There were issues after a few weeks. We had to quickly switch to a solution that does what it promises.”

That solution was found at Cryo Solutions, with which XiltriX International has already of projects in IVF laboratories in particular Netherlands have been realized. The hardware input on the part of Cryo Solutions concerns the MDR-certified CryoFill filling machines, that allows a seamless connection with the XiltriX alarm and monitoring system can to be made. In this case, this also ensures that the existing nitrogen vessels, which are often equipped with a different filling system, can be converted for use with the CryoFill. The rest of the installation is also scrutinized by both project parties taken, such as the nitrogen supply, the pipeline network and the necessary safety measures. “We often see with our customers do not have their cryogenic installation under control. They don’t always understand what is at the level of the control and monitoring equipment plays; or understand the importance of it”, says Richard van Woerden, commercial director of Cryo solutions.

Recently Richard returned with Han from England where they delivered a necessary upgrade to a cryo-installation in a hospital. “In this case, four parties were involved, all of whom were partly responsible were: the nitrogen supply, the installation, the vessels, the monitoring. The problem with this project was that there was no direction and the will to collaborate at these companies, which are partly competitors, was lacking. The vessel supplier, for example, only wants to deliver its vessels and doesn’t look at anything else. Everything that makes the work more complex, or tends to integration where they also have to provide a piece of service, they walk away. The evaluation of the monitoring part – whether what you say you do actually does what it is supposed to do – also had not occurred. In this case, that meant a Cryo Facility where tens of millions of pounds of material is stored, where the automatic filling did not work well and the monitoring was labelled as insufficient. That already led to problems with quality control, but nobody understood what exactly was going on. With the proposal we have now written we still use a local supplier for the nitrogen and the pipeline network. But everything happens under our project management. In this way we also relieve the customer. We know that what we deliver works when everyone else does what they’re supposed to do. They know that too, and we check that too. This ultimately results in a reliably operating installation.”

A big difference between English and Brazilian project, in the latter case, is timely anticipation of the importance of a good coordination between filling machine and monitoring system. That doesn’t mean that everything went without a hitch. “In Brazil there are hardly any serious cryogenic suppliers, so there we have to import everything”, says Dr. allen “Apart from the high import taxes on these products the customs officers are not accustomed to these products, which led to a significant delay getting them into the country. That delay worked double because we already cryogenic vessels with filling controllers had purchased, which did not proved to suffice in combination with the monitoring system. For the retrofit with the CryoFill controllers that hurdle at customs had to be taken again.”

Another challenge was the availability of trained technical personnel for the installation. As time was a decisive factor within the project, waiting for travel restrictions to be eased due to Covid was not an option. Where normally technicians from Cryo Solutions and/or XiltriX International would be flown in, their expertise has now been deployed to instruct technicians who are not specialized in cryo technology remotely. Not an easy task because, in addition to a lack of dedicated technical experience, things like a rather large language barrier and a significant time zone difference put the improvisational ability to the test. Partly due to the frequent sending back and forth of photos and videos of the situation on site and clear instructions from the Netherlands, we succeeded in realizing the installation in the desired manner. An additional handicap was that during the implementation process the repository was still under construction and, for example, network services had not yet been installed. Also, the sensors and alarm limits had to be set for all vessels. By doing and testing this already during the implementation, this prevents unwanted surprises during the production phase.

View on the Cryo Storage

The employees of CryoForLife can in real-time monitor all critical parameters in the cryo facility. Think of temperature, oxygen pecentage, liquid mass and liquid nitrogen level in the tanks, filling actions and nitrogen use, but also power cuts. The secure dashboard can be remotely accessed 24/7. The information from the XiltriX system is also used to refine filling operations, so that an optimal balance is obtained between, on the one hand the nitrogen use, and on the other hand the integrity of the samples. Also, a stable, user-friendly and safe working environment for the employees created by anticipate failures at the system level and defects. Han Weerdesteyn: “Because you should expect malfunctions and defects will occur at some point, it is necessary to take precautions to set off the alarms and avoid sample loss. Through using multiple alarm layers and make smart use of local flashing lights and sirens, and alarms via SMS, e-mail and telephone, no alarm goes unnoticed. Staff training to understand the challenges and risks is also part of this, which results in a good balanced operation that stable results yields.”

Collection has started from January 2022 of samples. Partly in connection with stricter legislation for IVF laboratories, which forces them to further risk mitigation, have different laboratories decided to house their samples at CryoForLife. The seven cryo vessels are already almost full. Christine is already diligently looking for new vessels, what because of long delivery times – now more than a year for cryo vessels – in connection with the global supply chain crisis is no mean feat. “The advantage is that, because the universal fit of the CryoFill controllers is not limited to one brand and/or type of vessel; I don’t even necessarily have to invest in brand new vessels.”

If you would like to know more about XiltriX, let me know. 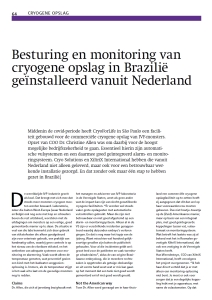 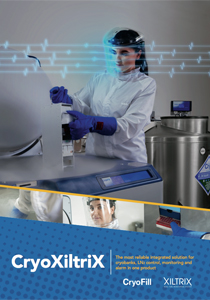 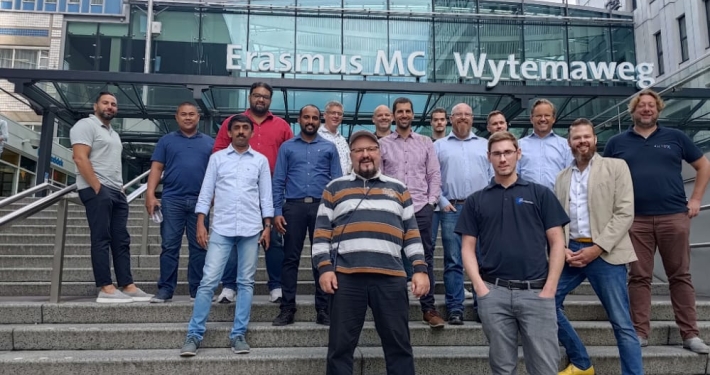 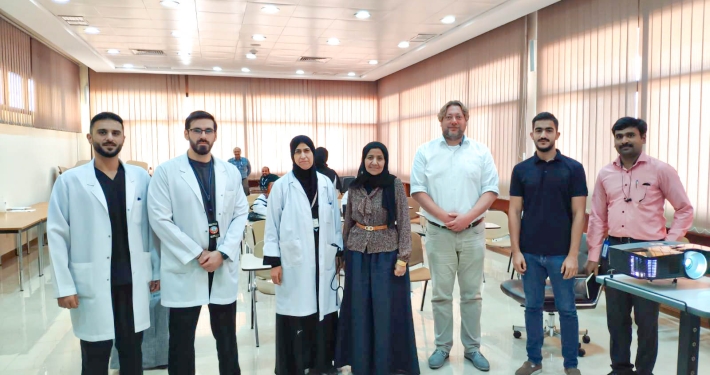